This biscotti recipe is truly the best! It uses sweetened dried cranberries, and pistachios and each cookie is dipped in melted white chocolate. They’re perfect for the holidays, go well with coffee and espresso and they’re easy to make. Check out all of our favorite cookie recipes too!

Biscotti and coffee are like biscuits and gravy. Like peanut butter and jelly, they’re meant for each other. You can’t begin to conceive of one without the other.

This is one of the best biscotti recipes ever! My mother-in-law has been making them for years and they are truly a favorite. The flavors of lemon, cranberry, pistachio, and vanilla mixed with chewy cranberries and pistachios make them very unique and festive. Each cookie is dipped in white chocolate taking them to the next level.

If you’re unfamiliar with this Italian biscuit, biscotti may scare you! You may be daunted by the prospect of baking foreign food and especially one that seems dry and tasteless… however, this couldn’t be further from the truth!

Biscotti tastes as tantalizing as it sounds. It derives from the Latin word biscoctus, meaning “twice-baked.” Italians apply the word to a variety of cookies, while Americans use it to specifically refer to the crisp, long, twice-baked cookie.

How to Make Biscotti

They’re really not that hard to make. Below are the basic steps to making them, we recommend reading this through before jumping to the recipe.

Variations of the traditional biscotti recipe run the gamut. Whether you crave spiced biscotti, nutty, citrusy, or chocolate-frosted, there are unique variations you can try.

Other variations include ginger biscotti, chocolate chunk, and fruit biscotti.

To add your own variations, simple use this recipe and then fold in other ingredients to replace the cranberries and pistachios, like chocolate chunks.

Why Is Biscotti So Hard?

They’re hard because it’s baked twice. Leaving the dough out after the first bake makes it especially hard.

Biscotti gets most of its taste from its mix-ins: pecans, pistachios, slivered almonds, and lemon zest, for example. Other tastes come from hazelnuts, cranberries and dried fruit, anise, and melted chocolate drizzle or dark chocolate chips.

Should Biscotti Have Butter?

Yes! Butter in biscotti lends to a richer flavor and comes out so tasty!

You can still ge the crisp and crunchy bite of a biscotti using butter and they’ll be less dry and more flavorful.

How Do You Know When Biscotti Is Done?

They’re done when they turn golden brown. It’s also done when it’s crunchy and dry throughout. The texture should look and feel as twice-baked as its name means.

How Long Should Biscotti Cool Before Cutting?

Biscotti should cool for about 10 minutes before you cut it. Don’t let it cool for any less time.

Originally an Italian biscuit, biscotti has since been adopted by American tastes. Like with other products of American culture, biscotti has been beefed up to American standards. In the U.S., it’s more flavorful, crunchier, and more sugary.

As you have learned, you can tailor this biscotti recipe to your specific tastes. While there’s an unchangeable foundation of any kind of biscotti, it can be creatively manipulated and made your own!

Let us know if you make this delicious biscotti recipe by leaving a comment and review below. We’d love to know your thoughts! 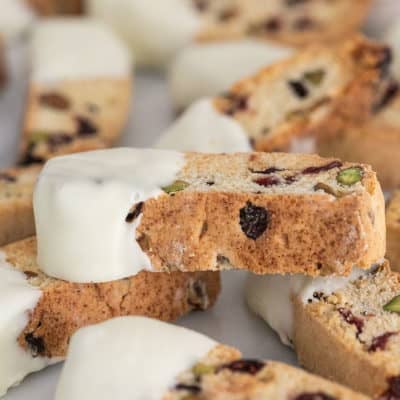 You can dip the biscotti in chocolate or white chocolate.  Add in other spices you think would be good too.

3 thoughts on “Biscotti Recipe with Cranberry and Pistachios”