This Swiss meringue buttercream frosting is absolutely delicious and has a light and airy texture. It’s silky smooth and not as sweet as traditional buttercream. We’re sharing all of the details and sharing everything you need to know about making it!

Did you know that cake is one of the most popular desserts in the US? Well, it’s true! There are a lot of reasons that this might be the case, including the delicious flavor, variety and how it symoblizes celebration.

Of course, in order to bake a perfect cake, you’ll need to have a perfect homemade frosting! We have a few frosting recipes on Sugar and Charm, but this one is by far a favorite. If you’re looking for a frosting that’s not as sweet, this is for you.

What Is the Difference Between Swiss Meringue Buttercream and Buttercream?

In its simplest form, buttercream is a mixture of butter and sugar that’s been beaten together into a fluffy whipped frosting.

This is what people generally think of when they imagine iced cakes or filled pastries. It may also be referred to as American buttercream.

Swiss meringue buttercream is the type of frosting that’s most often found in professional kitchens. Sometimes simply known as Swiss buttercream, it involves a double boiler, eggs, and is a bit more difficult to make than its American counterpart. But still, something that you can make at home.

It’s all about heating egg whites and sugar in a double boiler to make a smooth meringue and then it’s beaten with butter.

What Is the Difference Between Italian and Swiss Meringue Buttercream?

Italian buttercream is yet another variety of this frosting. It’s very stable and the difference comes down to the method of making the frosting as well as the temperature of the sugar mixture.

For Swiss the egg whites and sugar are heated and whisked to about 160 degrees together, then whipped to perfection in an electric mixer. The butter is then added to the thicker egg whites.

While Swiss meringue buttercream will eventually harden, it can be left at room temperature for about 8 hours. When spread on a cake, it will take over two days to lose its texture.

However, if you want your frosting to harden, that’s totally alright! Simply place it in the fridge in an airtight container for a couple of days. This will make it a bit denser than it would be if you ate it straight from the mixer.

American buttercream is by far the sweetest type of buttercream. Since this is what you’re likely most familiar with, think of Swiss buttercream as less sweet, creamier, and lighter in texture. The flavor and texture are still full and luxurious. It’s like a light whipped cream but with a buttercream frosting flavor.

Is Swiss Buttercream Good for Piping?

Like all buttercream varieties, Swiss buttercream is great for piping. You can create accents, patterns, designs, and words by naturally dyeing your frosting and piping it over another color.

We used this Swiss buttercream frosting recipe for our elderflower cake, but added lemon juice, lemon extract, and elderflower liqueur!

Can You Overbeat Swiss Meringue Buttercream?

Swiss meringue buttercream can be overbeaten. Once the frosting is silky and smooth, stop mixing so you can keep the soft, luxirous texture. If you’re going to use it for piping you can beat it until it’s a little more firm.

Now that you know how to make a delicious Swiss meringue buttercream, it’s time to get started! Scroll to the end for the full recipe.

This frosting is made with only 4 very simple ingredients!

Let us know if you make this Swiss Meringue Buttercream by leaving a comment and review below! 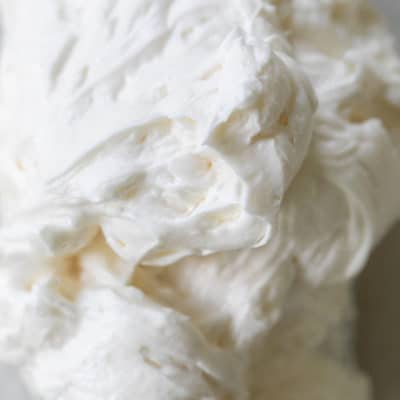 To change the flavor add in different extracts!  Use a candy thermometer to check the temperature of the egg and sugar mixture.