This snickerdoodle coffee recipe contains cinnamon, french vanilla creamer and a touch of nostalgia! It’s easy to whip up and perfect for a delicious little treat. It really does taste like a snickerdoodle in a mug!

Snickerdoodle cookies are very nostalgic for me because I’ve been baking them since I was a kid!

While thinking of flavors for yummy coffees, the classic cinnamon and sugar cookie popped into my head and I knew that a Snickerdoodle Coffee recipe would make the best coffee drink.

Also, I’ll add that my dad was a little part of the inspiration behind this too since Snickerdoodles are his absolute favorite cookie!

How To Make Snickerdoodle Coffee – Step By Step

Snickerdoodle In A Mug!

For the recipe, I brewed the amazing Dunkin’ Donuts Cinnamon Coffee Roll and French Vanilla coffee to create the perfect Snickerdoodle combo.

The aromas that fill the house while whipping this up are seriously so good!! I also added real cinnamon, sugar and some French vanilla creamer to the drink to make it taste like a Snickerdoodle.

What To Eat Pair with your Snickerdoodle Coffee

This Snickerdoodle coffee is great on its own, but also lovely with a sweet. Pair this coffee recipe with some cinnamon and sugar donuts or snickerdoodle cookies and you have the perfect afternoon treat!

Why not try this with these delicious Italian Rainbow Cookies or these simple Peanut Butter Cookies, double treats!

Where Do Snickerdoodles Come From?

There are a few tales of where this delicious little cinnamon cookie came from. Some sources say the Snickerdoodle came from Germany, or is Dutch in origin, or perhaps got its start in New England.

“The Joy of Cooking” claims that Snickerdoodles are probably German in origin and that the name is a corruption of the German word Schneckennudeln, which means ‘snail dumpling.’

There is also a series of tall tales about a hero named ‘Snickerdoodle’ from the early 1900s which may be related to the name of the cookie.

So in short, it’s still a bit of a mystery!

Check Out These Other Delicious Coffee Recipes

If you have tried this Snickerdoodle Coffee recipe, then please rate it and let us know how it turned out in the comments below! 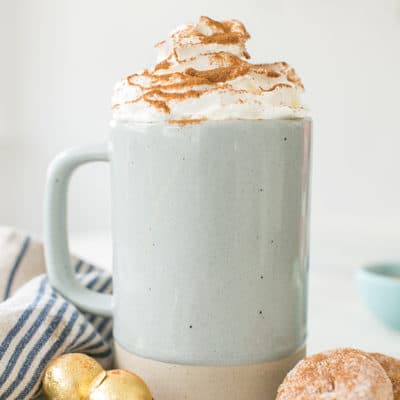 You can use any coffee you want. Following brewing instructions on the bag.