Our freshly baked, easy cinnamon roll recipe is made using frozen bread dough and topped with the most delicious cream cheese glaze! These are easy-to-make, foolproof, indulgent cinnamon rolls! The whole family will love these fluffy rolls!

I’ve been making cinnamon rolls from scratch for a very long time until I finally realized they take too long and personally I don’t have the time for long recipes with a lot of steps and ingredients! I am all about easy entertaining, especially on my weekends when our family is all over the place.

So we made the process simple and much easier by using frozen bread dough! Have you tried it?

Here’s the thing, I would make the dough from scratch if there was a tremendous flavor difference between the homemade dough and frozen dough (dough that was already made by professionals).

To my excitement, there is zero taste difference and frozen bread dough is JUST AS GOOD and much easier. These really are the easiest, best cinnamon rolls.

Just look at them?! Okay, I went a little overboard with the glaze, I really like a lot of glazes, but please note you don’t have to put this much on!

If you squint, you can see through the thick layer of cream cheese, that they look exactly the same as any of our “homemade” dough cinnamon rolls.

Why You’ll Love This Recipe

The dough is already made, making this recipe SO much easier! There is zero rise time when you use bread dough. No using a dough hook or yeast!

They are absolutely delicious, super moist and fluffy cinnamon rolls.

You can make them ahead of time and place the unbaked rolls in the refrigerator, covered in plastic wrap until you’re ready to bake them!

They’re fuss-free AND home-baked cinnamon rolls, so they’re warm and gooey when you take them out of the oven, how they should be!

How to Make This Easy Cinnamon Roll Recipe

We will cover everything you need to know to make easy cinnamon rolls, answer frequently asked questions and share our tips and tricks for recipe success.

If you prefer to skip to the recipe card, scroll to the bottom of the post and you will find the measurement and step-by-step instructions for making this recipe.

Here are a few items you’ll need to make this recipe:

This recipe for the rolls has only 5 ingredients total, takes about 15 minutes to prepare and 30 minutes to bake, and makes 12 large cinnamon rolls. The icing is separate but also very easy!

You can find all of these ingredients at your local grocery store.

Prepare your work surface with a lightly floured surface. We love using a pastry mat for this.

Roll the dough out in the shape of a rectangle that is 15″ in length and about 5-6″ width.

In a small bowl, combine brown sugar, granulated sugar and cinnamon in a and stir to mix.

Cover the entire surface with the cinnamon and sugar mixture.

Starting from the top, roll the dough tightly to make a log. Keep it as tight as possible and then cut 12 slices using a sharp knife.

I made little lines all the way down so I know where to cut to make them even. Some people swear that dental floss is the way to go when cutting cinnamon rolls, but we think a knife works fine.

Place them in a buttered cast iron pan, leaving some space between the rolls. They will expand and touch each other after they bake.

Baking cinnamon rolls in a cast iron pan is great for when you want to achieve a rich and golden-brown crust. Using a cast iron skillet offers more even heat distribution than other baking pans, which can result in more consistent results with every batch.

We love a good cream cheese frosting to top our cinnamon rolls off with! This recipe uses only 5 ingredients and takes about 5 minutes to make.

Make sure the butter and cream cheese are very soft before mixing them together. Also, add more milk if needed. You want it to be a thicker glaze, but remember it will also melt when poured over the hot cinnamon rolls.

The best way to store cinnamon rolls is in an airtight container. This will help keep them fresh and prevent them from drying out. Cinnamon rolls can stay fresh outside of the fridge for up to two days and in the refrigerator for up to one month. For even better results, warm the rolls slightly before serving.

You can also freeze cinnamon rolls for up to three months if you’re looking for a longer storage option.

If you want to switch up the recipe for these delicious cinnamon rolls try any of these variations:

How do you thaw frozen bread dough for cinnamon rolls?

To thaw frozen bread dough, leave it in the package and let it stand at room temperature for about 30 minutes until the dough reaches 55-60 degrees F. You can also thaw it in the refrigerator overnight.

What does pouring heavy cream on cinnamon rolls do?

Pouring heavy cream on cinnamon rolls adds a rich and creamy flavor to the rolls that pairs especially well with the sweetness of the sugar and cinnamon. Additionally, it adds extra moisture to the dough, resulting in soft and fluffy rolls. You pour the cream over the rolls before you bake, giving them an even tender texture. You don’t have to do this for our recipe, but if you want to try you can!

Do you put the icing on cinnamon rolls before baking?

Icing is typically added to cinnamon rolls after they are baked, however, there are some recipes that suggest adding a glaze or icing before baking. This can create a sticky and sweet coating on the outside of the rolls which may be desired for certain recipes. Ultimately, it is up to the baker’s preference whether or not to add icing before baking.

Should cinnamon rolls be baked on low or high heat?

Cinnamon rolls should be baked at a moderate to high temperature of 350°F (175°C). This will create a perfect balance of lightly crisp outside with a soft and fluffy interior. Baking cinnamon rolls at too low of a temperature can cause them to come out doughy and underbaked, while baking at too high of a temperature can result in overbaked rolls. For our recipe we bake the rolls at 350 degrees fro about 25 minutes and it works perfectly.

When to Serve with Easy Cinnamon Rolls

Cinnamon rolls can be enjoyed for breakfast, brunch, or dessert. They are great for weekends or special occasions. We like to serve them for Easter brunch and Christmas morning. Serve them with any of these brunch items:

Need more brunch ideas? Check out these brunch recipes and pair them with our brunch cocktails!

If you’re looking for an easy way to make this classic brunch treat, this truly is the best cinnamon roll recipe.

If you make this easy cinnamon rolls recipe please let us know what you think in the comments and reviews below! 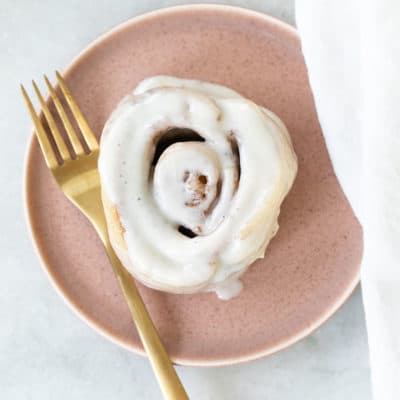 There are several brands of frozen bread dough that will work. Try Rhodes Bread Dough or we used Primo Taglio Pizza Dough. The white traditional pizza dough they sell at Trader Joe’s would work too. You can bake these in a cast iron pan or a rectangular casserole dish. It makes 12 and they expand so make sure the dish is big enough for the rolls to have a little space. When making the glaze, it’s important the butter and cream cheese is very soft. This will result in a creamy texture. If it’s cold it will be clumpy and hard to make it smooth.