We have been making these french toast puffs for years! Perfectly, puffy fried puffs that are soft in the middle and crunch on the outside. Truly one of our favorites!

These are called french toast puffs and they’re the most delicious version of french toast ever! A crispy and crunchy outside with a soft, almost doughy like puff inside. Seriously amazing!

We’ve got you covered with that. Before we get to the recipe though, let’s learn a little more about French toast. Does it really come from France? How do I keep it from becoming soggy? Isn’t it just eggy bread?

The History of French Toast

Despite its name, French toast probably didn’t come from France. While there is some debate, it seems that it was actually created by a man named Joseph French in the 1700s. However, there is some evidence that something along the lines existed as far back as the 5th century.

The Romans served bread soaked in milk and eggs and fried in oil or butter and called it pan dulcis. In medieval Europe, cooks would moisten stale bread with milk or eggs and reheat it.

How Do You Keep It From Being Soggy?

The secret to keeping it from getting soggy is to not oversoak the bread and use the right bread. The bread that’s too thin will be flimsy to hold the mixture and bread that’s too thick will never cook. It’s hard to make these puff soggy because of the way they are cut, which is a benefit!

You also want it to be more eggy than milky and you want to make sure the temperature is right so you don’t scorch the outside of the bread while leaving the inside soggy.

What’s the Difference Between Eggy Bread and French Toast?

They are not the same things! Despite being very similar, they have one big difference: eggy bread is savory while French toast is sweet.

How Long Should You Soak French Toast?

You don’t actually want to soak the bread. This will make it soggy. Instead, dip one side in the egg and milk mixture and then quickly flip it. Once both sides are coated, put it on the griddle.

Can French Toast Be Kept Overnight?

Yes! Surprisingly, you can make it ahead of time and reheat it in the morning.

Do You Need to Refrigerate French Toast?

Just pop it in the microwave for about 30 seconds, plate it up, add some toppings and no one will be the wiser that you actually made it the day before. You can even heat it up in the toaster or on the griddle as well, which will bring back some of the crispness.

Let us know if you make these puffs by leaving a comment and review below! 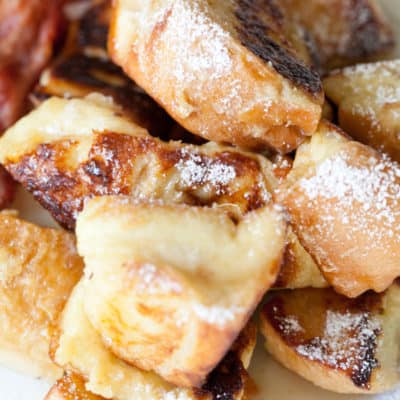 We have been making these french toast puffs for years! Perfectly, puffy fried puffs that are soft in the middle and crunch on the outside.
5 from 1 vote
Print Pin Rate
Course: Breakfast
Cuisine: French
Prep Time: 20 minutes
Total Time: 20 minutes
Servings: 4 people
Calories: 2186kcal
Author: Eden