When the holidays come around, our cravings for cinnamon rolls hit more than ever! We’re going to show you how to make the best eggnog cinnamon rolls! They combine the holiday taste of eggnog with classic cinnamon rolls, which will make these rolls a hit at any Christmas party.

There is so much to love about these fluffy, moist, and super flavorful cinnamon rolls! The dough is made with butter and eggnog, and they’re topped with the most perfect cream cheese and eggnog icing. Making homemade cinnamon rolls takes time as the dough needs to rise twice, but they are worth the wait!

Another thing we love about these cinnamon rolls is that they can be overnight cinnamon rolls. The second rise can be done in the refrigerator overnight so they’re ready to bake in the morning.

Here’s your guide to homemade cinnamon rolls, so yours come out heavenly!

How to Make Eggnog Cinnamon Rolls

Ingredients for the Cinnamon Rolls

— Granulated Sugar – Used in the dough to give it a little sweetness as well as in the cinnamon and sugar mixture.

— Eggnog – Store-bought eggnog is perfect for this recipe.

— Butter – Unsalted butter is best for making these homemade cinnamon rolls. Butter is used twice in this recipe, once in the dough and then more to brush on the dough.

Ingredients for the Cinnamon Roll Icing

2 — In a saucepan, heat the milk and eggnog until warm.

3 — In a mixing bowl, combine melted butter, sugar, salt, eggs, and yeast. Give it a whisk.

5 — Using a bread hook, mix on low until the ingredients are combined.

6 — Flour your hands and remove the dough.

7 — Knead on a floured surface for about 5 minutes.

8 — Place in a greased bowl and let the dough rise for 1 1/2 hours until it almost doubles in size.

9 — When doubled, punch down the center and prepare a floured surface to roll the dough.

10 — Roll the dough out on the floured surface into a 15×9 inch rectangle.

12 — In a small bowl, mix cinnamon and sugar, and then spread it all over the butter. The more, the better!

13 — Starting at the 15-inch side, tightly roll up the dough and pinch the edge together to seal. Cut into 12-15 slices.

14 — Place cinnamon roll slices an inch or two apart in a baking dish and let rise again (about 45 minutes) until they double in size. They will all be touching. This is also when you can let them sit in the refrigerator overnight. Just let them come to room temperature before baking.

While the cinnamon rolls are baking, make the whipped eggnog cinnamon roll icing by adding all of the ingredients into a mixing bowl and mixing on high until light and fluffy.

Spread it all over the warm cinnamon rolls.

One of the biggest tips we have for you for baking cinnamon rolls is to use instant yeast. You won’t have to go through the extra step of proofing active dry yeast in water, which can consume precious time.

When you’re ready to bake, you can dump instant yeast with the rest of the ingredients! Of course, you’ll want to check the date on it first. So long as you’re baking before the expiration date, you can skip proofing.

If your instant yeast is out of date, then you can test it to see if it’s still good to use. Mix 1 teaspoon with 1/4 cup of lukewarm water and then check it after 10-15 minutes. If the mixture’s become foamy, then you’re good to go!

If you don’t have instant yeast on hand, then here are some tips for proofing yeast.

You’ll want to get some water to 110-115 F. Mix in a small amount of sugar and then the yeast. After 5-10 minutes, if there are bubbles and foam on top, then that means your yeast is fine to use.

How to Store Cinnamon Rolls

The great news is that there are several ways to store cinnamon rolls!

You can keep some out at room temperature for easy access and if you’ve got many hungry mouths to feed. Otherwise, you can throw your cinnamon rolls into the refrigerator.

If your dough doesn’t rise right, then your cinnamon rolls aren’t going to be great. So how can you get your dough to rise better?

Well, yeast loves hot and humid environments. So to get the ideal environment for your dough, you can put it in a bowl and cover it with either a towel or some plastic wrap. Set it in a warmer corner of your kitchen to encourage the dough to rise.

How to Reheat Cinnamon Rolls

1 — Preheat your oven to 350 F. Cover your cinnamon rolls with foil and heat them up for 10 minutes or until they’re warm and the frosting is soft again.

2 — If you’re in a rush, you can microwave your rolls for 30 seconds and repeat as needed until they’re soft.

How Do You Make Dough Rise Faster?

As we’ve just said above, the key to making the dough rise has it in a warm and humid environment. So just by following the tips above, you can get the dough to rise faster.

To speed the process up, even more, put the dough over a pan of warm water in the oven. Or you can also microwave your dough on low for 25 seconds. You can do this 1 or 2 times for the best results.

Can Cinnamon Roll Dough Be Left to Rising Overnight?

Yes, you can! Just cover it tightly with plastic wrap and refrigerate it.

We know that baking at home can be tough to do if you have a busy schedule, so rising dough overnight can be a game-changer. You can leave it in there for up to 18 hours.

What Temperature Do You Bake Cinnamon Rolls At?

Can You Freeze Cinnamon Rolls After They’re Baked?

Yes, you can! Make sure you put them in an airtight container or wrap each one tightly in plastic wrap.

How Long Do Cinnamon Rolls Last?

This depends on how you store buttery cinnamon rolls.

How Do You Store Unbaked Cinnamon Rolls?

If you’ve got unbaked cinnamon rolls, you can put them in the fridge for 24 hours if you’re going to bake them the next day. Otherwise, you should freeze them right before the baking step.

Can You Freeze Cinnamon Roll Dough?

Yes, you can. Freeze them right after proofing. Put it in plastic wrap and defrost when you want to make cinnamon rolls.

Can You Bake Cinnamon Rolls From Frozen?

Technically, you can, but the dough won’t taste great. It’s best to use up all your fresh ingredients and bake fresh cinnamon rolls.

How to Make Cinnamon Rolls Ahead of Time

The best way to make buttery cinnamon rolls ahead of time is to just go ahead and bake them completely. You can then freeze each one individually and then heat them when you want to eat them!

What’s the Difference Between Cinnamon Rolls and Cinnamon Buns?

In most cases, “cinnamon roll” and “cinnamon bun” are synonymous.

However, some cinnamon buns don’t have icing on top and usually have nuts. Cinnamon rolls don’t contain nuts and typically have a cream cheese glaze.

If you love these cinnamon rolls, try these recipes too!

Homemade cinnamon rolls are the best; they can take someone right back to their childhood with just one bite. So if you want to impress your family and friends this holiday season, why not make our eggnog cinnamon rolls? With our tips, you’re on your way to making some buns of perfection! 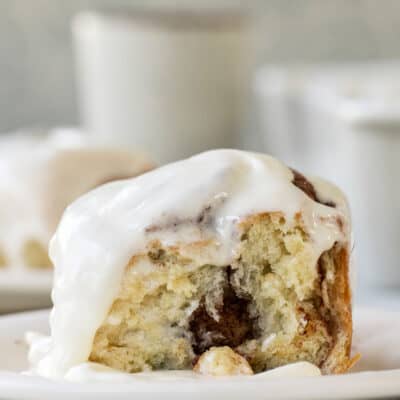 These cinnamon rolls rise two different times. The first time is before shaping the rolls and the second is after they’re cut and in the baking dish. The second rise can be overnight in the refrigerator. Then bring to room temperature and bake.  Make the glaze while the rolls are baking. If it curdles, add a little more powdered sugar and continue to beat on high.