Creamy, delicious homemade spiked eggnog recipe with bourbon. A classic Christmas drink that is a must during the holiday season!

It’s a tradition for us to make a batch of creamy homemade eggnog around the holidays and our eggnog panna cotta. This recipe is rich and creamy and the best eggnog we’ve ever had!

There is also a really big difference between store-bought and homemade eggnog. If you haven’t tried making it yourself, give it a shot! The flavor is completely different than what you buy in the store, which I don’t even like! But homemade eggnog is seriously one of the best holiday treats.

The origins and the ingredients used to make original eggnog drinks are debated. According to the Oxford English Dictionary, nog was “a kind of strong beer brewed in East Anglia.” The first known use of the word “nog” was in 1693. Alternatively, nog may stem from noggin, a Middle English term for a small, carved wooden mug used to serve alcohol.

However, the British drink was also called an Egg Flip, from the practice of “flipping” (rapidly pouring) the mixture between two pitchers to mix it. One dictionary lists the word “eggnog” as being an Americanism invented in 1765-75.

Whatever the case and wherever it came from – this spiked eggnog recipe is delicious!

How To Make this Homemade Eggnog Recipe

1 — In a large saucepan, heat water and sugar. Swirl and stir until sugar becomes a light brown color, about 3-4 minutes. Do not overcook, or it will become hard like candy.

2 — Add the heavy cream and whole milk. Reduce heat to medium and stir.

3 — In a large mixing bowl, beat egg yolks, brown sugar, and vanilla until thick. With the whisk on medium speed, add the milk and sugar mixture. Then pour in the bourbon.

6 — Fold the egg whites into the eggnog to get a rich, creamy texture.

7 — Pour into a large pitcher.

8 — Add a pinch of sea salt and cinnamon to the top of each serving.

9 — Serve chilled or warm, and enjoy the best cup of butterscotch eggnog ever!

— Use fresh, organic eggs for this recipe.

— If the eggnog curdles when you fold in the egg whites, whisk it on medium again until it’s all incorporated. Then pour it into a pitcher.

— You can omit the bourbon to make eggnog without any alcohol. It’s still just as creamy and delicious!

— Do not overcook the sugar and water mix, or it will harden too much.

— Top each glass with a bit of salt and cinnamon.

What alcohol goes in eggnog?

There are two options that you can use for this recipe. Rum or Bourbon Whiskey.

Rum will give the recipe a sweeter flavor but still has notes of vanilla and caramel. Bourbon gives it a delectable touch of creme brûlée and caramel flavor. It really depends on what spirit you like better. Some people can’t stand whiskey, so rum would be a much better option.

Both options are just so scrumptious. Rich, creamy with a satisfying and deep vanilla flavor that’ll please the crowd!

And, of course, you can also leave the alcohol out if you prefer.

What is eggnog made of?

This rich, creamy cocktail is made with egg whites, egg yolks, sugar, and heavy cream. It’s spiked with rum or whiskey, and it’s whipped to perfection and served during the holidays.

A glass of homemade eggnog is almost like sipping melted ice cream. It’s super creamy, sweet, and has flavors of cream, vanilla, and some spice if spiked.

Check Out These Other Delicious Drink Recipes 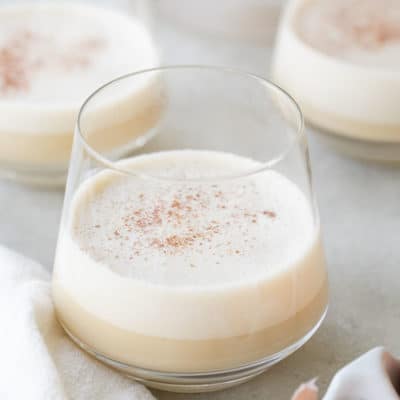 If the mixture curdles when you add in the egg whites, use an electric mixer to mix on high until smooth. Then pour into a pitcher.  You can use rum or bourbon in this recipe. Both are amazing. Bourbon has a bit of a stringer taste, rum has a bit of a sweeter taste.