Mexican chocolate is a mix of cayenne pepper, chili and cinnamon with cocoa and the flavor combo is marvelous! So when our good friend Todd was planning his Mexican fiesta birthday bash he asked me to come up with some delicious desserts… and flowers too!

I wanted to stay within the theme so I made some Mexican chocolate brownies along with a few other Mexican-inspired treats. The brownies were such a hit! I was getting emails the next day for the recipe.

I guess the combo of rich chocolate with the perfect amount of sweet and spicy had people hooked. They’re incredibly moist and super chocolatey, just like a brownie should be! I adapted and altered this recipe and I’m so happy I tried it out! One thing I love about this recipe is that it’s just a pot, bowl and wooden spoon.

No mixer or mixing bowl, which is kind of nice sometimes! I highly recommend these, especially if you’re throwing a Mexican fiesta or dinner party!

Let us know if you make these Mexican brownies by leaving a comment and review below! 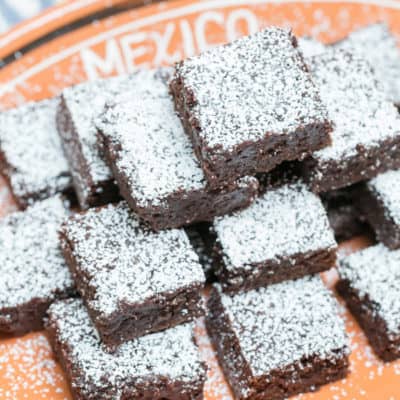 These Mexican chocolate brownies feature a mix of cayenne pepper, chili and cinnamon with cocoa and the flavor combo is delicioso! The flavors of rich chocolate with the perfect amount of sweet and spicy will have you hooked. The brownies are incredibly moist and super chocolatey, just like a brownie should be! They’re perfect for a Mexican fiesta, Cinco de Mayo or a dinner party! Enjoy!
5 from 1 vote
Print Pin Rate
Course: Dessert
Cuisine: Mexican
Prep Time: 10 minutes
Cook Time: 20 minutes
Total Time: 30 minutes
Servings: 15 -20
Calories: 148kcal
Author: Eden