A pineapple cocktail that uses the entire pineapple! Learn how to make a Toasted Coconut Pineapple Cocktail and a Pineapple Cup! It’s refreshing you’ll feel like your on a tropical beach!

When we go to Paradise Cove, I’m always tempted to order the pineapple mojito because they serve it in a pineapple cup and it makes me feel as if I’m on a tropical vacation.

This past week I had a lonely pineapple staring at me for a few days and I was inspired by the ones we sip by the beach at the Cove. So, similar to carving a pumpkin, I carved out the middle of the pineapple and pureed it in a blender leaving the shell for a cup.

The carving part can be a little messy and you may or may not end up with some pineapple splashes on your face! I then whipped up a very refreshing, no sugar added (so it’s not too sweet), toasted coconut pineapple cocktail! I’m loving this cocktail and it’s a total crowd pleaser!

Really, who doesn’t like drinking a coconut pineapple cocktail out of a pineapple cup?! I felt pretty relaxed sitting in my backyard sipping this… all I was missing was the sand. Try it!

How to Carve a Pineapple

There are fancy pineapple carving tools, but if you’re like me I keep my kitchen gadgets limited. So here are a few simple steps for carving a pineapple!

This is a pineapple cocktail with rum and coconut rum. It’s so refreshing and easy to make! If you really feel like you don’t need a pineapple cup, you can serve this shaken cocktail over ice instead.

The toasted coconut adds a lot of flavor too, so don’t forget that!

How to Make a Pineapple Cocktail

Let us know if you make this by leaving a review below! Tag us on social @sugarandcharm to show us your creation! 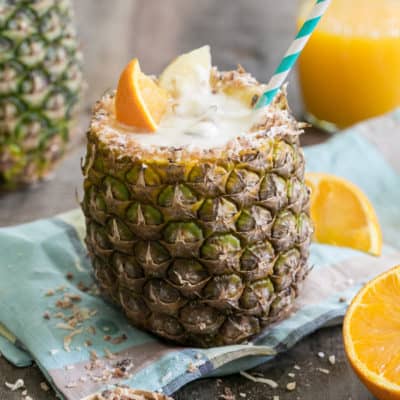 Add more or less sweetener as you like. You can also add more alcohol to make it stronger too.