The easiest way to bake a delicious glazed ham! It’s easier than you think with a delicious homemade honey, thyme glaze. We’re giving you all the details to bake your own for your next celebration. Ham 101!

In my house, we bake a ham for special occasions. Usually Easter and Christmas. Even though it’s a tradition for these special celebrations, ham is actually very easy to make if you follow our tips. It’s great for the main course and works for brunch or dinner.

It also looks so pretty on the plate when served with greens and a delicious honey glaze!

How to Bake a Ham

That’s it! Let us know if you make this ham for a celebration by leaving a comment and review! We love to see what you all make!

You still bake a “cooked” ham in the oven before you serve. Just to be clear on that!

How Long to Bake a Ham

Personally, I think the glaze is the best part! This recipe is a favorite and adds so much flavor to the ham. It’s truly the best!!

It’s made with vinegar, Worcestershire sauce, salt, honey, cayenne, thyme, and butter. You just whisk all of those ingredients together and let it sit in a bowl until the ham has cooked for 45 minutes. Then brush it on the ham and bake a little longer for a golden brown ham.

The juice at the bottom of the pan after the ham is glazed and cooked is delicious. It’s worth pouring in a little bowl to pour over the ham slices when serving.

How do you reheat a ham in the oven?

If you have extra ham left over, you can wrap it in foil and place it in the fridge to be reheated the next day. To reheat the ham, just place the wrapped ham in a 325 degree oven until it reaches an internal temperature of 135 to 140 degrees. If it’s sliced, it won’t take too long to warm in the oven.

Let us know if you make this ham by leaving a comment and review below! We’d love to know your thoughts. 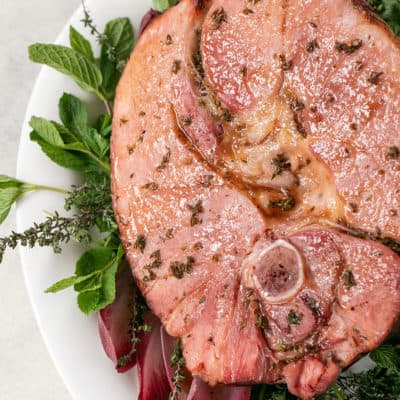