Homemade churros turned into ice cream sandwiches! The churros are so tasty and create the perfect doughy, crunchy swirl to make a sandwich with! They are absolutely delicious!

Making the dough is interesting because you make it in a saucepan over heat, which seems complicated, but it’s very simple.

Personally, I get much satisfaction from frying dough in hot oil. Seeing it bubble and raise to the most perfectly golden, down crispy and chewy dough is very satisfying!

For the piping tip I used an Ateco star in size 4. One thing I would suggest is using a coated piping bag, rather than a plastic bag since the plastic can exploded when squeezing because the dough is thick!

Another great thing about this recipe is that the churros don’t have to be super hot when serving these, they still taste just as good after they cool a bit. That means you can make them ahead of time to serve later!

Now that the churros are made, you can turn them into ice cream sandwhiches! Add a scoop of artisan ice cream on one churro and then top with another.

There are so many flavors you can use that would go perfectly with these! Dulce de Leche, chocolate, fruity flavors, it’s endless.

If you want, you can also serve them with dipping sauces like caramel or chocolate.

How to Made Marble Candy Apples

Let us know if you make this churros recipe and ice cream sandwiches by leaving a comment and review below! 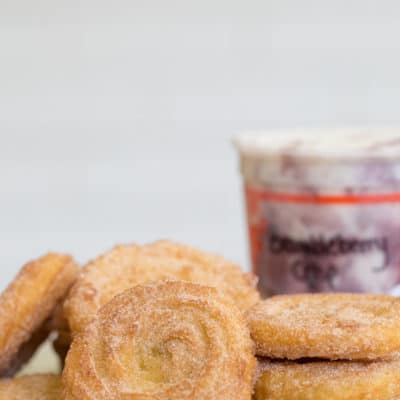 This recipe is adapted from Food Network.

2 thoughts on “How to Make Churros Ice Cream Sandwiches”