This vodka sour recipe is similar to a classic whiskey sour cocktail but made with vodka. If you love a simple, circuits cocktail that’s super refreshing this drink is for you! This vodka cocktail has a frothy egg white foam and sweet, tart taste. It’s a wonderful spring and summer cocktail recipe.

If you love a sour cocktail recipe, then you have to make this vodka sour. It’s can be made within 5 minutes and has a fresh lemon juice flavor. It’s an easy cocktail to make and perfect for happy hour. The frothy topping gives the drink a nice balance and looks beautiful.

What is a Sour?

A sour is one of the first traditional cocktails. This drink was described in Jerry Thomas’s book How to Mix Drinks in 1862! A sour is a mixed cocktail containing a base liquor, lemon or lime juice, and a sweetener. Egg whites are also added to some sours to give the cocktail a creamy, foam topping.

Ingredients in a Vodka Sour Recipe

This drink has only 4 simple ingredients! These are ingredients you most likely have at home already. When combined they give this classic vodka sour a perfect balance of sweet and tart.

The full vodka sour recipe is in the recipe card below.

Vodka – Use good quality vodka as this is the base of the cocktail. You want a smooth vodka that will add flavor and create a great drink.

Lemon Juice – Freshly squeezed lemon juice is always the best. Lemon juice has a very sour and tart taste by itself, which is why we use a sweetener in this recipe to balance that flavor. But when you use fresh lemons, you have the best quality of juice. You can use Meyer lemons for a sweeter juice.

Simple Syrup – This is a mixture of sugar and water that is simmered together to create a syrup. It’s often used in cocktail recipes as a basic sweetener. If you prefer to use another sweetener, you can use maple syrup, agave, or a zero sugar simple syrup.

Egg Whites – Eggs whites add a frothy top to the cocktail and balance out the tart flavor. We love the creaminess it adds to the drink. You can leave this out if you want to create a vegan cocktail. If you’re going to use egg white, use an organic, pasteurized egg.

How to Make a Vodka Sour (Step by Step)

Here is the basic formula for making vodka sour.

Shake your drink vigorously to cool the ingredients and allow air for a forthy cocktail. Shake for at least 30 seconds.

Use fresh lemon juice only. This will give the cocktail the freshest flavor.

We don’t recommend a dry shake for this drink. Add the ice into the cocktail shaker and shake the ingredients with ice. It’s easier to make and tastes better when shaken with ice. It creates a very smooth, chilled drink.

Looking for ways to switch up this classic drink? Check out these ideas:

If you want that frothy foam on the top, but don’t want to use egg whites try aquafaba or sucrose. You can find these online and follow the directions for creating a foam.

Aquafaba is the name of the liquid that you find when you open a can of chickpeas. It’s completely vegan and can be whipped into foam. We use sucrose in our salt air margarita and it looks beautiful!

We’re all about charming cocktail garnishes! Here are the best ideas for adding a garnish to your cocktails:

The Best Vodka to Use for a Vodka Sour

There are a lot of vodka brands on the market and we’ve tried several of them. Here are a few favorites:

When to Serve a Vodka Sour

Serve this tasty drink as an evening cocktail, for cocktail hour, or for any of these occasions:

This basic formula will also work if you want to make a quick tequila sour or a gin sour. Just simply swap out the vodka for tequila or gin.

Vodka is a distilled spirit made from fermented cereal grains or potatoes. It’s a clear liquid that originated in Russia but has spread worldwide due to its popularity.

Pure vodka is a great base liquor that pairs well with almost anything. Vodka is smooth enough that you can drink it on its own. But it is also the foundation of both sweet and savory cocktails.

What is vodka sour made of?

Like all sour cocktails, the formula is pretty simple. It’s made from citrus juice, vodka, and a sweetener like simple syrup.

Does vodka sour have sugar?

A vodka sour does contain sugar. However, you can decide what sugar to use. We prefer classic simple sugar, which is a mixture of water and granulated white sugar. You can also use maple syrup or make simple syrup using a zero-sugar sweetener.

Is it safe to drink raw egg whites?

If you’re nervous about adding egg whites into your recipe, use pasteurized eggs. They are gently heated in their shells, just enough to kill the bacteria, but not enough to cook the egg. They are cooked at 140°F for 3 minutes making them safer to use in recipes calling for raw egg.

How many calories does a vodka sour have?

The calorie count of a vodka sour will depend on the vodka you use. However, you can expect a sour cocktail like this to have about 210 calories per drink.

What kind of alcohol is in a sour?

There are several base spirits that can be used in a sour. Gin, whiskey, brandy, tequila, pisco, rum , and amaretto are just a few that you can use to create a simple mixed sour cocktail.

We really enjoy the subtle flavors of vodka and have created some of the best vodka cocktail recipes. Here are our favorites:

Let us know if you make this vodka sour recipe by leaving a comment and review below! 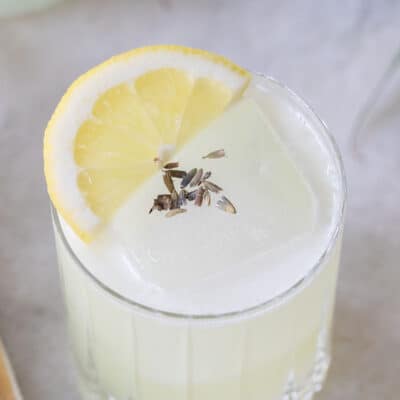 Switch out the simple syrup for another sweetener like maple syrup.  Use a zero-sugar sweetener for a low sugar cocktail.  Add more vodka if you prefer a stronger drink.  Double this recipe to make 2 vodka sours.

4 thoughts on “How to Make a Vodka Sour”