The original Apple Cider Moscow Mule recipe! This cocktail is a fall twist on a classic Moscow Mule. It’s a lightly spiced mule and is easy to make, and it is best served in a copper mug to keep it icy cold.

We had to put the half-gallon of apple cider we have from our apple-picking adventure to good use, so Moscow Mules it is!!

As much as I love a standard Moscow Mule and our popular Blueberry Moscow Mules, I wanted to put a fall twist on it, and this one is by far my favorite yet!

The cinnamon adds a beautiful fall aroma, and the apple and ginger are a match made in cocktail heaven. Of course, the bonus is that they’re beyond easy to make! No shaking or muddling; just pour and enjoy!

Despite its name, the Moscow Mule was first created in Manhattan in the 1940s. Made with vodka, ginger beer, and lime juice and garnished with lime and mint leaves, it is a simple but wonderfully easy and refreshing cocktail.

This delicious apple cider cocktail really couldn’t be any easier to make, and it comes together in a matter of minutes with a few ingredients.

The metal cup keeps the cocktail delightfully cold while you drink it, and it means the ice doesn’t melt as quickly, which can result in the dilution of your drink.

It’s no secret that I’m a huge fan of Moscow Mules, and it felt only right that I make a fall version of one of my favorite cocktails! This mule is lightly spiced with cinnamon and apple cider, giving it a wonderful freshness. Low in calories and easy to make, this mule cocktail is a must-have! 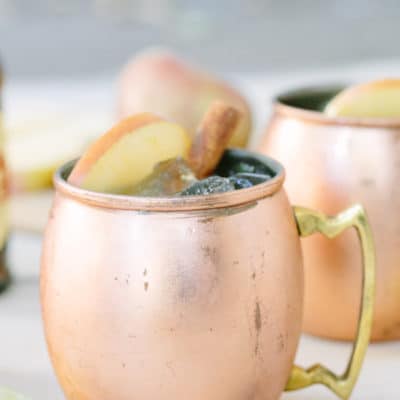